Come Fly With Me- Let’s fly, let’s fly away… 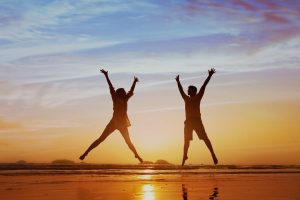 Ever just wanted to get away from it all?  Yes, I hear you say but what if you have recently separated?  Is it still a good idea to plan and take that holiday of a lifetime?

When Peter and Cassie* separated, Peter thought he deserved a bit of a break – an opportunity to get away from it all and go somewhere exotic to relax.  The lead up to separation had been stressful.  Peter had been unhappy for a long time, but Cassie was busy with the kids, didn’t seem interested in what he wanted and so they grew apart. He felt like he was there to work hard and pay the bills but anything he wanted for himself had been lost along the way.  He realised that he should have made more of an effort, but he didn’t know how.   Finally, he summonsed the courage to say what he wanted.  He had bottled up his feelings for so long that the announcement escalated and went badly so he had no come back when Cassie demanded that he leave their home.

Peter never intended a friendship at work to become anything other than that. Once he moved out of home though, he found that without the kids in his life, he was lonely.  The odd night out with Emma provided Peter with some much-needed company.  He then found that he was really enjoying her company and started to look forward to seeing her both at work and outside of work.

Peter thought it was the perfect idea: a holiday away with Emma where they could explore whether they had more in common than work and the topics they traversed on their occasional dates.  He went on line and found a fantastic opportunity at reasonable prices to take off for Thailand.  Emma could afford the time off work but not the holiday.  Peter had been holding back some pay from the joint account he still had with Cassie (an account which was normally used to fund the family and pay the family’s expenses as they hadn’t yet sorted out their finances).  He told Emma not to worry as he could pay for it and no strings attached.  If it didn’t work out they could always go back to being work colleagues.

What Peter didn’t appreciate is that even though he thought his post separation income was his, his finances were still under scrutiny. Until he finally resolves all financial aspects of his separation with Cassie, either by way of Court Orders or a Financial Agreement (that is a formal, legally enforceable settlement) he is under an ongoing obligation to make full and frank financial disclosure to Cassie or her lawyers.  That means not only income but what he is spending his money on.  There is no what’s mine is mine in family law until that settlement occurs.

If Peter had the means to spend money on a holiday, the argument would be that he had the means to meet Cassie’s financial demands for maintenance for herself or to pay expenses such as the mortgage repayments.  If he could afford a trip for two, what else has he spent his money on?  The misstep of trying to reward oneself post separation can backfire terribly.  The other parent, who cannot afford to up and go, may well become suspicious. “Have I been told the truth about his finances?  What else has he been hiding?   Has he done this before?  Do I need to go back over our life together and look for signs of him spending money on other women?”  Suspicion in a family law client can greatly exacerbate legal fees.  Yes, you are entitled at law to the other party making full and frank disclosure.  The Family Law Rules provide for what documents you need to produce to each other.  When you go looking for evidence, it comes at a cost, therefore you must establish in advance the likely expense v the benefit gained by such exploration.

For Peter, he needs to stop and get good legal advice about the wisdom of spending money on himself and a new relationship particularly if there are complaints that the family are struggling with basics.  He needs to wait and reward himself only once the deal is done.  Even then, excessive lifestyle or spending post finalising your family law matter can cause the other party to consider whether there was an undisclosed asset or source of funds that they should have known about.  They may even apply to the Court to set aside a settlement based on a miscarriage of justice by reason of suppression of evidence.  They may not stop and think that you have gone into debt to take that well-earned vacation.

The best advice is to stop and think about how your spending will be perceived and the lens with which the Court may regard that spending.

At Caroline Counsel Family Lawyers we can assist you make decisions and provide advice on the dos and don’ts of post separation or post settlement spending.

*Not their real names