If you leave me, can I come too? What happens to our beloved pets post-divorce and separation? 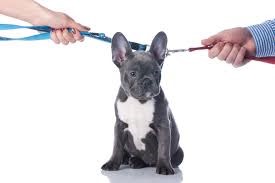 “Here boy” was the last thing you hear your ex-partner say as they walk out the door.  When separating, parties often gloss over or don’t think about who will have custody of the beloved family pet.  Either party assumes that it will be staying/leaving with them.

Let’s face it, for most couples, they are part of a societal phenomenon whereby they have “fur babies” as opposed to “actual babies”.  And for those couples the custody arrangements for Beethoven are paramount[1].

At Caroline Counsel Family Lawyers we assist clients to understand how the law may apply to their special Beethoven.

So, how does the Family Law Act approach making a determination with respect to disputes about pets.  In the recent decision of Downey & Beale[2], the Court adopted an approach based on property principles.

The parties were engaged in 2012 and married in 2014.  They separated two (2) years later in 2016.  With everything else agreed between the parties, the one issue was who retained Beethoven.

The wife’s position was that despite the husband purchasing Beethoven, the wife contended that the husband had purchased the dog as a gift for her and, she maintained she paid the costs of Beethoven including maintenance and vet appointments.

On the other hand, the husband argued that he paid for Beethoven and Beethoven was registered in his name.

The Court held that by the husband purchasing Beethoven it was considered to be a “contribution” pursuant to section 79 of the Family Law Act[3] however, rejected the husband’s argument with respect to Beethoven being registered in his name.  The husband did this eight (8) months after the parties separated.  It is also prudent to note that Beethoven had been living with the wife’s parents since separation.

The Court did not consider any section 75(2)[4] factors nor did they consider that any adjustment to either party was appropriate.  Put simply, the question was, who owned Beethoven at law.

Ultimately, the Court found in favour of the wife.

What parties must also contemplate is what happens in the situation where there are children of the relationship and those children have an attachment to slobbery old Beethoven.  Parties here need to consider what is in the best interests of the children, as their attachment to Beethoven is paramount, especially when their parents are separating, and times are already tumultuous.

People include pets in their Will, so why should it be any different for separating parties to include their pets in a formal settlement?

Separating isn’t easy.  One would liken separation to a mine field.  So, it’s imperative to get advice early on so you know what to do (and what not to do) until such time as a formal agreement has been entered into.

We can assist you work through viable options in relation to your Beethoven and wherever possible avoid Court.

[1] For the purposes of this article, the dog will be called Beethoven.