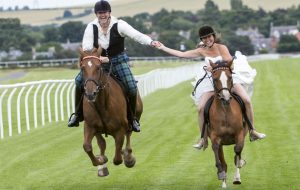 We know there is an increase of family violence which coincides with major sporting events particularly football grand finals.  That powder keg combination of alcohol and testosterone set ablaze with tribalism and chest beating often plays out in horrific scenes on the home front.

The Melbourne Cup and associated races in the first week of November is no different even though the events have high rates of female participation.  Dressing up in one’s finery and having a lovely day at the races is how people like to think of the races.  The reality for some is different.  It can be a logistical and expensive nightmare of having to purchase expensive member dining options or even public marquee spots.  Then there is the effort to get to the track.  That means battling the throngs to get on trains or spending yet more money on other modes of transport to and from the track.  Given the unreliability of public transport in recent years, many couples try to avoid one less stress by spending more money on private transport.  So even before they call the first race on Derby Day, some couples are in the red from the sheer expense of kitting up and arranging somewhere to perch on the day.  In turn this can lead to over zealous punting in the hope to recoup some of the money spent.

As a family lawyer, it is not uncommon for me to get the call after the running of the Melbourne Cup to be told a relationship ended either at the track or at home after the event.  The combination of stress, money spent, and money lost can sometimes be more than a marriage or relationship can bear.  Admittedly it is likely that there were already chinks in the couple’s armour, but stressful situations can be sufficient to sway them towards finality.  A separation which is not considered, thought about, discussed and examined but one which occurs in the heat of the moment can be incredibly destructive.

Those matters thereafter are difficult to navigate towards common sense and when emotions and anger prevails, people make poor choices and expect an outcome from the legal process that it is simply not designed to provide.  They want to be vindicated that they did nothing wrong.  It was the decisions of their former spouse that led to the breakdown – they are to blame.  These clients are also very vulnerable users of legal services as they continue to press their claims thinking that someone, at some stage, will vindicate them.  Judges at final hearings are not in the business of finding innocent and guilty parties.

Only in the rarest of cases will a judge find conclusively and positively for one half of a separated couple.  This is a result not only of the no fault divorce system but also because many cases are not clear cut, there being behaviour by both parties that is less than ideal.  In some cases, judges avoid being overly critical as they are mindful of the inter personal dynamic that may establish in the future post separation parenting relationship.  The judge, put simply, does not want to arm one party to the gills with emotional ammunition to go on punishing the other party when in fact both of them should be focusing on their children and what they need from their parents.  What children need the most is for their parents to stop fighting.

Gambling debts are a different issue.  Where one party has heedlessly gambled with the money or resources of the couple then the other party can, provided judicial discretion is exercised, claim a claw back of those funds nefariously dissipated. Even though the money is gone, the gambler’s share of other relationship or marital assets can be discounted by virtue of their losses. In an increasingly on line and cash less environment, where on-line betting agencies flourish, it is easier to establish who has wasted and how much they have wasted on gambling. Whilst it is not a hard and fast rule that gambling losses will be so regarded, it is worthwhile considering whether this is an apposite argument to run.

When families struggle to provide for their children it is hard to reconcile the behaviour of one parent that has made that task even more daunting with their professed love of their children. In recent times, evidence has been led to demonstrate that certain forms of gambling are addictive and therefore a person should be considered to be a victim rather than a perpetrator. In family dynamics, it is still a difficult proposition to forgive when so much damage has been done and not just because of the economic loss and subsequent hardship but from the lies and deceit which invariably accompanies the gambler’s behaviour.

On the flip side, I have also known couples who met each other for the first time at the track and their combined enthusiasm for the sport has led them to a life long passion for each other and the races. You know what they say – one person’s meat is another person’s Melbourne Cup…..

The information in this blog does not constitute legal advice and cannot be relied upon by you. If you require advice specific to your situation you must contact Caroline Counsel Family Lawyers for legal advice. The contents of this blog are relevant as at 14 October 2019.  We recommend you obtain specific advice relevant to you and your family’s situation.